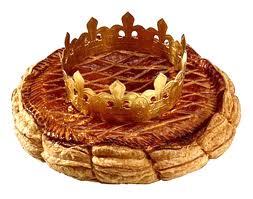 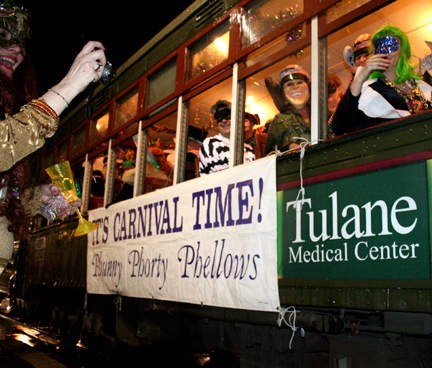 Tomorrow is January 6, or Twelfth Night, the official kick off to the 2010 Mardi Gras Season. The first two events are on January 6- the Phunny Phorty Phellows ride a decorated St. Charles Streetcar from uptown to downtown. The Joan of Arc Parade walks throughout the French Quarter.

The Phunny Phorty Phellows board the streetcar and began their ride to “Herarld the Arrival of Carnival” down the St. Charles Ave. Streetcar Line. The Phellows are an historic Mardi Gras organization that first took to the streets 1878 through 1898. They were known for their satirical parades and today’s krewe members’ costumes often reflect topical themes.

This second annual parade walks on Twelfth Night, Joan of Arc’s birthday, in celebration of her story and the golden statue that graces the French Market at New Place de France. The post-parade party features free live music by Pierre Pichon and Marc Gunn beginning at 6:45 at The Market Cafe©, 1000 Decatur Street.

Route: Begin at Decatur & Conti Streets; up to Chartres, across Jackson Square, continuing on Chartres to St. Phillip, up to Joan of Arc statue at St. Philip and Decatur Streets in front of Market Cafe©

The Joan of Arc Fete was a one day festival celebrating the life and legacy of St. Joan of Arc, Maid of Orleans. The festival featured panel discussions, a free French class, songwriting and costume workshops, a silent auction, a cabaret-style arts showcase of Joan-related chamber music, original songs, and theater excerpts. The Festival ran on Sunday, January 3, 2010 from 10 am to 6 pm at the Bienville House Hotel, 320 Decatur Street in the French Quarter.

King Cake season arrives with Carnival, with local bakeries and groceries selling their version of King Cakes, many of them filled. Varieties include cinnamon, strawberry, cream cheese, blueberry,
lemon, pecan praline, apple, raspberry, plain, and many, many more flavors. King Cakes are shipping around the world, some with Mardi Gras packages including beads & doubloons; purple, green and gold decorations; and masks.