Mardi Gras Around the World Series- Carnival of Binche, Belgium!!

0
by NewOrleansMusicMan in Carnival, Mardi Gras

This is a smaller Mardi Gras than most, though it is beginning to get on the map due to their heavy duty, one of a kind Mardi Gras tradition. Binche is a Belgian town of 32,000 near the French border. They have a Mardi Gras folk tradition dating back to the 14th century, that UNESCO has designated a cultural treasure in the same class as Japan’s Nôgaku theater and Lithuania’s symbolic cross crafting. 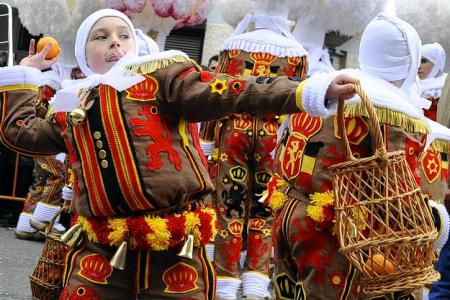 After the early wake-up call, a breakfast of Champagne and oysters is customary. During the carnival, you’ll see Pierrot, Harlequin, and peasant costumes, but the central characters are the Gilles—local men wearing wax masks, wooden clogs, and elaborate black, red, and yellow costumes that are stuffed with hay and adorned with white collars and bells. In the mid-afternoon, nearly 1,000 Gilles converge on the town’s Grand Place, trade their masks for large ostrich-feather headdresses, sing, dance, and pelt the crowd with blood oranges, a symbol of fertility. 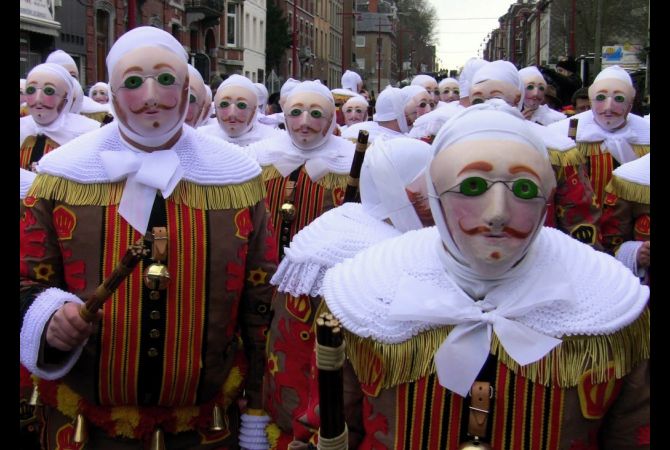 The Carnival of Binche is during the Sunday, Monday, and Tuesday preceding Ash Wednesday. The carnival is the best known of several that take place in Belgium at the same time.

Events related to the carnival begin up to seven weeks prior to the primary celebrations. Street performances and public displays traditionally occur on the Sundays approaching Ash Wednesday, consisting of prescribed musical acts, dancing, and marching. Large numbers of Binche inhabitants spend the Sunday directly prior to Ash Wednesday in costume.

The centrepiece of the carnival’s proceedings are the clown-like Gilles. Appearing, for the most part, on Shrove Tuesday, they range in age from 3 to 60 years old, and are customarily male. The honour of being a Gille at the carnival is something that is aspired to by local men. From dawn on the morning of the carnival’s final day, Gilles appear in the centre of Binche, to dance to the sound of drums and ward off evil spirits with sticks.

Later during the day, they don large hats adorned with ostrich plumes, which can cost more than $300 to rent, and march through the town with baskets of oranges. These oranges are thrown to, and sometimes at, members of the crowd gathered to view the procession. The vigour and longevity of the orange-throwing event has in past caused damage to property – some residents choose to seal windows to prevent this. The oranges are considered good luck because they are a gift from the Gilles and it is an insult to throw them back.