New Orleans is an old town, with a wild and varied history. New Orleans is old enough to have survived French & Spanish rule, the Battle of  New Orleans, Northern Occupation under the despot Butler, carpetbaggers, Jim Crow Hurricane Katrina, etc.  Now comes the Eve before the Super Bowl, the first time the franchise has ever reached the NFL Pinnacle Game.  Post Katrina, New Orleans has again remade itself via the Who Dat Nation, the wildest group of NFL fans in the history of the NFL bar none. Now it’s the whole nation, thanks to Good Morning America, CNN, and other national media picking up this Who Dat Story.  New Orleans is the birthplace of the Who Dat Nation, but America is making the Who Dat Saints their team. Here’s a picture from the Who Dat Super Bowl Kick Off Parade honoring the late Buddy Diliberto, who claimed when the Saints make the Super Bowl, he’ll put on a dress. Buddy didn’t make it, but 1,000’s of New Orleanians did it for Buddy!  Who Dat!! Who Dat!! Go Saints!! Happy Mardi Gras!! 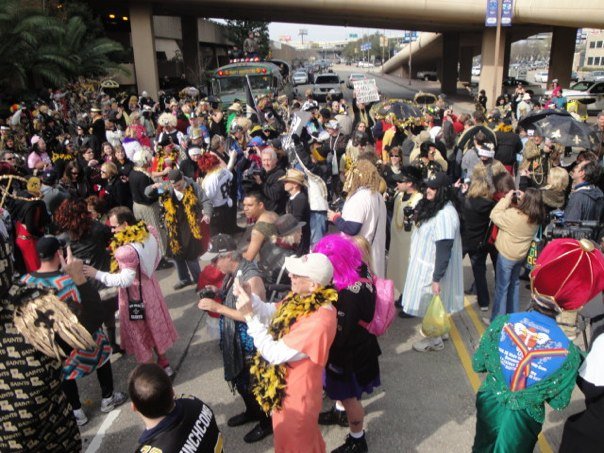 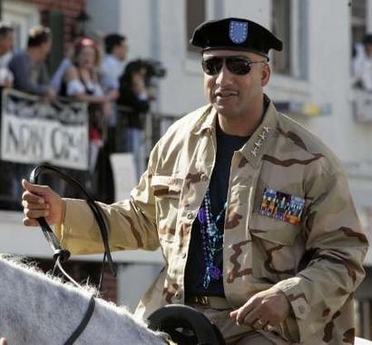 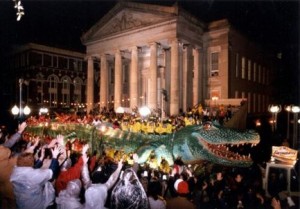 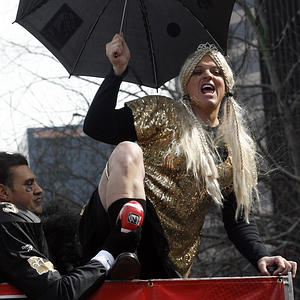 NEW ORLEANS — More Carnival krewes are making changes to their plans for Super Bowl Sunday, with parades moving dates and times to avoid rolling during the big game.

WDSU has learned that Alla will move its parade from Sunday, Feb. 7, to Saturday, Feb. 6, and will follow the Choctaw and Adonis parades on the Westbank.

In addition, the Carrollton and King Arthur parades schedule to roll uptown that Sunday will start one hour earlier — beginning at 11 a.m. — to accommodate the Super Bowl.

These are the latest changes caused by football’s biggest game, which is looking more and more like it may include the New Orleans Saints.

Jefferson Parish’s “Family Gras” event, which was scheduled for that entire weekend, has been canceled for this year. The krewe of Rhea canceled its parade because of the game, and Centurions moved its parade to the Friday before Mardi Gras.

2
by NewOrleansMusicMan in Mardi Gras

Rhea captain Anna Marie Soto said Wednesday that krewe members concluded turnout would be low, whether the now 8-0 Saints are in the game or not. They expect turnout to be zero if the Saints are indeed playing.

“That would’ve affected our riders and people coming in the street,” Soto said. “If the Saints get in the playoffs and in the Super Bowl, we wouldn’t have anybody out there.”

Rhea normally rolls in the early afternoon two Sundays before Mardi Gras and has been parading on Veterans Memorial Boulevard since 1969. Soto said she worked with Jefferson Parish officials to find another date in 2010, but the only options were evening time slots that didn’t appeal to krewe members because the parade attracts entire families with children.

“We really just have to sit out this year,” Soto said, adding that members didn’t want to risk spending the money to produce the parade only to find the streets and floats sparsely occupied.

Another Metairie krewe that has long paraded immediately after Rhea, the Krewe of Centurians, anticipated the Super Bowl conflict and switched its 2010 date a year ago, said captain Norman Bourgeois Jr. Centurians moved forward five days to Friday, Feb. 12, partly because of the game and partly because the krewe was already interested in making the move, Bourgeois said.

By parading on Friday night of Carnival’s final weekend instead of the preceding weekend, he said, the krewe hopes to increase member participation and crowd sizes and boost that day’s Friday’s Carnival activities in Metairie, which Bourgeois described as inconsistent in recent years.

“It’s been a long time since we’ve had a really good parade on Friday,” to compete with the offerings in New Orleans, he said.

New Orleans officials have not heard any concerns from krewes scheduled for Feb. 7 about competing with the Super Bowl, said James Ross, spokesman for Mayor Ray Nagin.

While the Super Bowl was part of the decision for Centurions, Bourgeois said, krewe officials had no idea at the time they sought their date change that the Saints would be making an historic run.

But the team’s bright prospects halfway through the regular season seem to validate the decision, he said.

“I don’t think anybody would want to miss that opportunity” to watch the Saints’ first Super Bowl, Bourgeois said. “We’ve got to dream.”