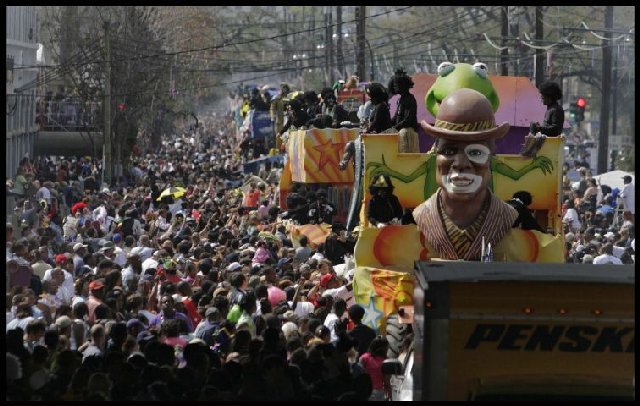 Mayor Nagin led Zulu this morning down Jackson Avenue on horseback. Zulu, celebrating its 100th anniversary, was early for the first time in recent memory. Nagin was wearing a Roman leather gladiator costume with no sleeves. I received 5 coconuts after the 12 or so Duke, Maid, past King/Queen, and Special Zulu position floats. My favorite coconut this year is from the “Big Shot Crew” (see picture below). In the past, Zulu coconuts came with the coconut milk intact. Now, the milk is removed on most of the coconuts, which helps preserve them.

Zulu was led by New Orleans’ own Edna Karr High School. Since Katrina, there has been a change, mostly for the better, in high school marching bands. Edna Karr leading Zulu typifies this change. In the past, Edna Karr and Sara T. Reed’s bands were indifferent. Now they are approaching the same league as perennial powerhouses St. Augustine, McDonough 35, and in the female high schools, St. Mary Academy and Xavier Prep.

The crowd for Rex on St. Charles avenue between Napoleon and Louisiana Avenues was relatively light. This was very unexpected. It was heavier over the weekend, especially on Bacchus Sunday. Bacchus Sunday is an all day affair, with parades from 11 am through 9 pm. Mardi Gras Day is from around 7 am to around 1 or 2 pm, when the trucks finish uptown.

One of the coolest aspects of Rex is they are one of only two krewes that utilize wooden wagon wheels on wooden float carriages. Proteus the day before Rex is the only other krewe using old wooden wagons with wood-spoked wheels.

The newest float beds of the older two krewes, ironically, belong to his majesty Rex, built in 1951 after the old Rex den on Calliope Street burned. The most unusual Carnival wheels that require a wheelwright are the light carriage wheels belong to the krewe of Napoleon’s mini-floats; these are built on the beds of buggies purchased from a French Quarter carriage company.

Who maintains the wooden wheels? You need a master wheelwright, and the last one I knew who maintained the wheels for the oldest krewes was Earl Wyman. He’s long gone, so who does that job now? There are no listings for master wheelwrights in the New Orleans Yellow Pages.

Rex has followed the recent trend of most New Orleans parading krewes of broadening out their throw selection. Rex has thrown plush Boeuf Gras the last few years. This year, they also threw a very large plush Boeuf Gras. For dozens of years, Rex threw a very basic, bland medallion. Now they have an entire line of Rex beads and medallions. They have thrown a standard 16 oz cup for years and now they have a second, more colorful, larger cup.

Two of my favorite throws I caught for 2009 (see photo) were a Muses decorated shoe and the Big Shot Crew Zulu coconut. Muses had an couple of wild electric logo toys- a round mirror with lights and a fan that doesn’t cool very well but provides a very entertaining light show with the Muses name revolving and appearing & disappearing.

Muses was once again the clear leader in number of innovative throws. Here’s a partial list of throws that I found on Craigslist for sale on Monday, February 23:
The “Top Secret” throw, a poster sized print up with a description and likeness of all their floats, and amusing writings on each float.
A shoe bracelet in the colors of silver, red and black.
A light up crystal necklace that blinks and is heart shaped. Still sealed in package, with an “M” on it.
A light up blinking bead still sealed. It says “Muses 009 License to Swill” on it.
A stuffed alligator with Muses written on it.
A hard to get hand-held fan to cool you off in summer. When the soft blades go around the word “Muses” lights up and revolves several ways. Very cool.
Muses bead maze games.
A Muses street sign bead.
A light up ring, just twist to activate blinking.
Combination light up flashlight/bottle opener.
And the big prize throw- the highly coveted radio, including neckstrap, ear buds, and automatically scans to pick up all stations.