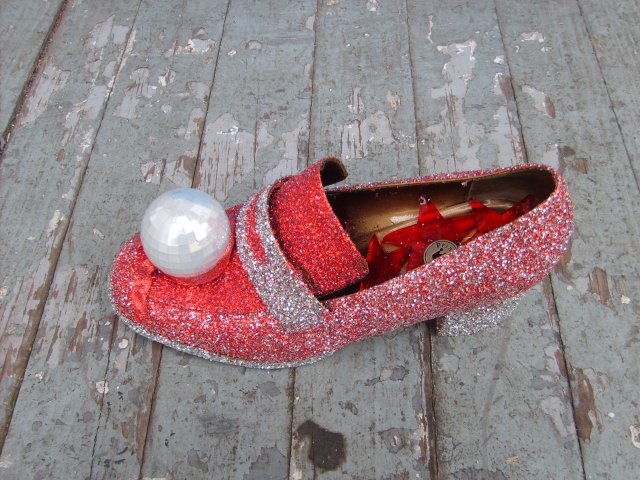 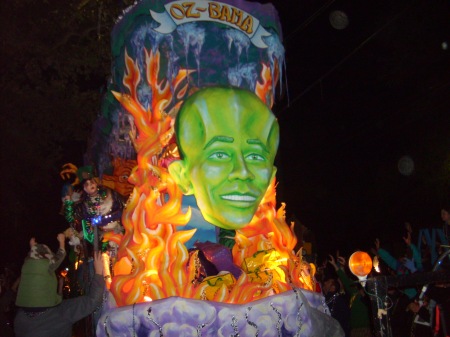 Throws are getting more sophisticated every year. Throw variety stagnated for decades, but now, certain forward leaning Krewes are pushing the throw envelope in exciting new directions. Most novel throws are novelty in nature, but some are functional as well. The clear leaders in 2009  were Krewe of Muses and Krewe d’Etat. Muses had more depth and breath of new throws than any other krewe last year in MG history hands down. d’Etat had the number 1 overall throw, but no depth or breath to speak of.

Now to the overall winner by a country mile, Muses. Egad, what an elegant krewe, cooler than cool, all New Orleans and all good things about New Orleans. Innovation across the board- more original, new throws than all the other krewes together! Keeping Mardi Gras Throws innovative and fresh into the new decade!!

Throw innovation is only one of the games of Muses, the largest and baddest of all the woman’s krewes.  In their prime in the mid 1980s, Shangri La in Chalmette was a mighty all-female krewe, with over 1,000 members. However, their membership declined since Katrina, and chose not to parade in 2009.

Muses began parading as an all-female krewe in 2001. Staci Rosenberg is founder and captain of Muses. In just eight short years, Muses is at the absolute top of the New Orleans krewes in terms of creativity and numbers of throws. No other krewe comes close to matching the depth and breadth of their throws. They also are one of the largest krewes in terms of membership, with 1,500 members.

At the 2010 Pussyfooter’s Ball at Blaine Kern’s Mardi Gras World on the East Bank, the centerpieces on each table were Muses shoes decorated in Pussyfooter themes and colors. Now the Pussyfooters march in Muses each year, so that was another cool aspect of that excellent ball, the Muses connection. 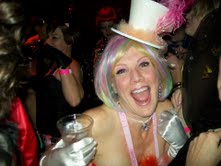 Pussyfooter having fun at her 2010 Ball

Muses, like most krewes, keep their new throws hidden from public view until the parade rolls. Muses has announced for their 10th anniversary ride, they have a lighted shoe bead with several flash settings, plus a plush birthday cake.  No doubt that is just the tip of the iceberg, I’m  confident that Muses is saving the best for the parade. They have more throws bearing their logo than any other krewe, numbering around 30. Their throw quality also breaks records- jewelry to be thrown by Muses for 2010 will the highest quality yet. None of this is cheap, throws are getting more expensive, which is surprising considering the recession.

I follow Minister DI from Le Krewe d’Etat on Twitter, here’s his post from July 09- Can our 3-D drinking vessel be topped? We are working on that and promise new fresh for KDE followers. Live to Ride. Ride to Live. I’m convinced that d’Etat will offer another ground breaking throw for 2010. 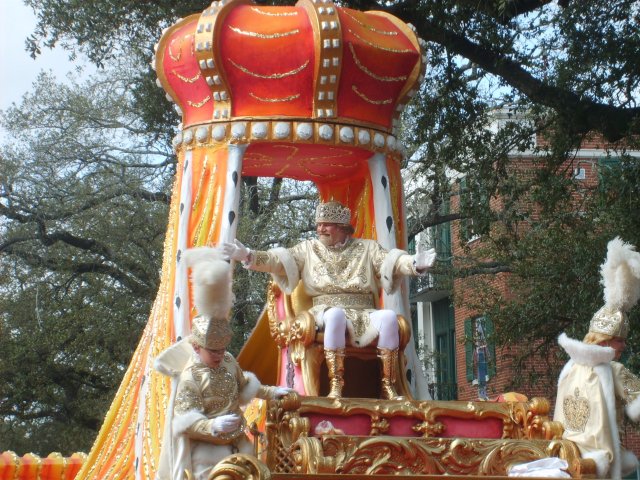 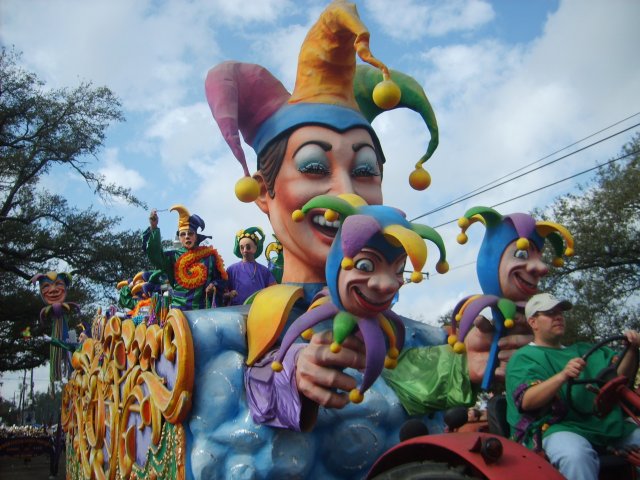 Rex, King of Carnival, throws a brilliant daytime parade on Mardi Gras Day. Their throws have always been behind the curve, as innovation has come very slowly to the School of Design’s (Rex’s organization) parade.  2010 changes all that, as Rex has gone GREEN!!! Their purple, green and gold cups will be biodegradable, and the bead string is biodegradable also. Now when Rex beads get stuck in Quercus Virginiana (the Live Oak Trees that line Rex’s St. Charles Ave. parade route) the strings will dissolve.  I’m not sure how that helps the environment or lowers the carbon footprint of beads. Nevertheless, for their cup, Rex has broken new ground that lowers its carbon footprint.