0
by NewOrleansMusicMan in Carnival, Mardi Gras

From January 31 – February 17, 2015, Venice will slough off the winter gloom and burst into life. During the Carnival (Carnevale), this most magical of cities fills with a mass of masked party-goers – posing and preening, dancing and philandering, in a slightly surreal re-invention of a great tradition of the city.

Glancing at the portrayals of 18th-century Venetian life in the works of Pietro Longhi or Gabriele Bella in the Querini Stampalia gallery (querinistampalia.it) or the Ca’ Rezzonico museum (visitmuve.it) will reveal that that was exactly what Venice in its party prime was all about. It’s not for everybody. It can be intensely crowded, and rates in hotels and restaurants soar. But it is a unique occasion, and a great time to see the city in a new and exciting light.

In truth, those that get here mid-week during the first week might wonder what all the fuss is about: besides the skating rink in Campo San Polo and a handful of low-grade events in out-of-the-way corners, there’s not a lot to keep you busy. If it’s excitement you want, aim for the weekends, and the final weekend in particular. see the carnival website (carnevale.venezia.it) for more details. 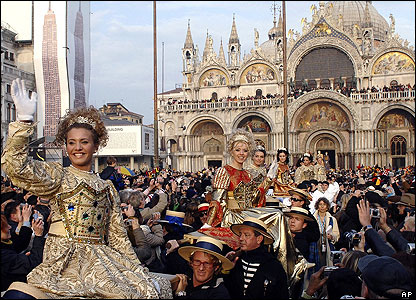 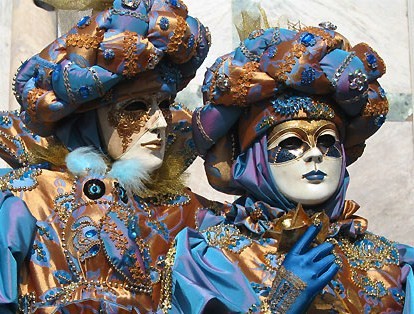 Carnevale: a history of masks

The Venetian propensity for hiding behind masks was legendary: a rigid caste system coupled with ample opportunities for indulging in a host of vices made anonymity very desirable in an overcrowded city where detection was otherwise unavoidable. In the 13th century a law was passed banning masks while gambling. Later norms made it illegal to make masked visits to convents, or to wear masks during many religious festivals.

In the end, it was easier to stipulate when masks could be worn: most importantly, in a crescendo of frantic merry making, from Boxing Day until Shrove Tuesday – the period known as Carnevale (from carnem and vale, Latin for “meat” and “farewell”: a reference to the Church’s ban on eating meat during Lent). The French stamped out the festivities when they took command of the city in 1797. And so it remained until 1979 when it dawned on local authorities that a revamped Carnevale would boost tourism in the city at a quiet, damp, misty time of year. The festival now lasts for two weeks in the run-up to Lent.

If everything to do with Venice’s Carnival gets too much, the Veneto region offers a host of alternatives, including a magnificent procession of floats in Treviso over the final Carnevale weekend, and the carnival in Verona, this latter claiming superiority over Venice having run uninterrupted since 1531. On the Friday before Shrove Tuesday, a great fat “king” parades through the street with a gnocco (dumpling) impaled on his sceptre, at the head of a procession of floats and costumed citizens.