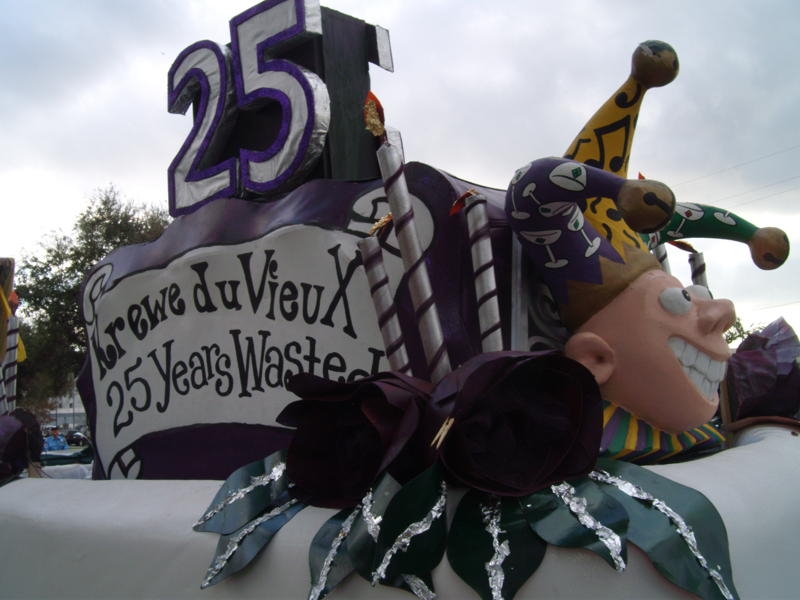 I had more fun last night with my krewe than I’ve had since…I last rolled with my krewe a year ago! I’m an Escort, meaning I play the role of Security Guard for my float, along with several other Escorts. Since KdV rolls through Marigny & the Vieux Carre, the streets are narrow and the huge crowds last night had to be kept off the float for most of the parade.

The weather was wonderful and warm, so unlike any other KdV parade I’ve been associated with or watched. This is always a cold weather parade, since it runs very early in the Carnival Season. What a wonderful, unexpected, delightful change!

Get involved in our big local holiday, and JOIN a krewe and RIDE (or walk)!! It is a big part of  New Orleans’ identity, and the feeling is indescribable. I like to interact with the crowd, I high five as many spectators as I can, while screaming, “Happy Mardi Gras to you, & you, & you, etc.” I do this for 10 minutes on, 5 minutes off for the entire 2.5 mile route. As we high five, our eyes meet, and I get a small rush of energy. At the end of the parade, you have aggregated so many interactions with parade goers that you feel high, high on life. The world is a way better place during parades.

KdV has unique, themed throws.  Each sub krewe has their own sub krewe throw(s); however, any member can produce a limited edition throw and throw it alone or with fellow krewe members. The krewe throw may  be a fly swatter, or sticker, or bumper sticker, dreidel, etc. The type of throw may stay the same, but the contents change. The two krewe-wide throws, the cup and wooden nickel, are used every year but dressed up with the new theme.

The crowd last night seemed very special. I was amazed at the high number of coordinated costumes and big time painted faces in the crowd throughout Marigny and  French Quarter. There were more people in very nice costumes  with superb make up than I’ve ever seen for KdV.  I guess it was all the costume parties along the parade route? Otherwise, I cannot explain this phenomena. 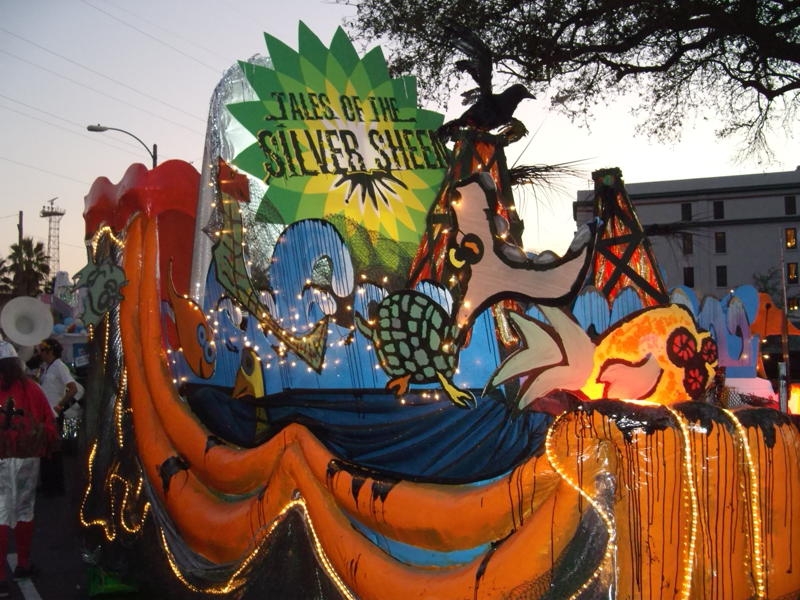 A few words about the truly memorable parading music provided by the Krewe of Underwear band, Egg Yolk Jubilee. Here’s a wonderful 2001 video of EYJ with the Emperor of the Universe himself, Ernie K-Doe!! We used EYJ last year, and they were hired back this year.

The fabulous weather had a big effect on the crowd, more  Last night, it was 6o degrees at parade time! While dancing my ass off to the fabulous New Orleans Radiators, I sweated to KdV like never before.

When the Rads started after the Brass Band Jam, the KdV party gained traction and moved up a level. The Rads are on their farewell tour and I feel lucky we had them for our party last night. They didn’t disappoint and showed they are leaving at the top of their game after 35 years and 4,500 concerts!  They will be sorely missed. 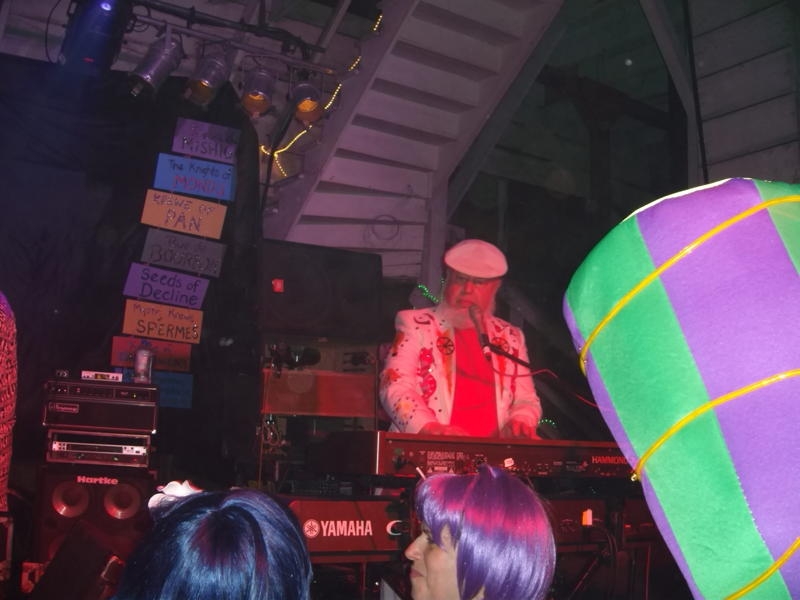 Didn’t make it past the Rads to the more unbelievable Trixie Minx, as I wore out a bit from 9 hours of  fun & parade work. Didn’t drink last night, so it wasn’t the alcohol eventually getting me down.

Before there was KdV, there was its predecessor, Krewe of Clones.  Clones grew directly out of the Contemporary Arts Center. The CAC ran the parade, and the parade staging area was the CAC parking lot on Camp Street. It was an arty, satirical parade from the start. I still have an original 1984 Krewe of Clones T shirt with the theme Barbie & Ken go to the World’s Fair.

The night of the parade, we drove our float into position next to the CAC.  When the parade was almost out of the staging area, we took advantage of the loose formation conditions, and drove our float straight onto the route. The Parade Marshall waved us on. For the next few years, we morphed that old van into other animals, and continued to crash the parade until the Krewe perished from infighting. 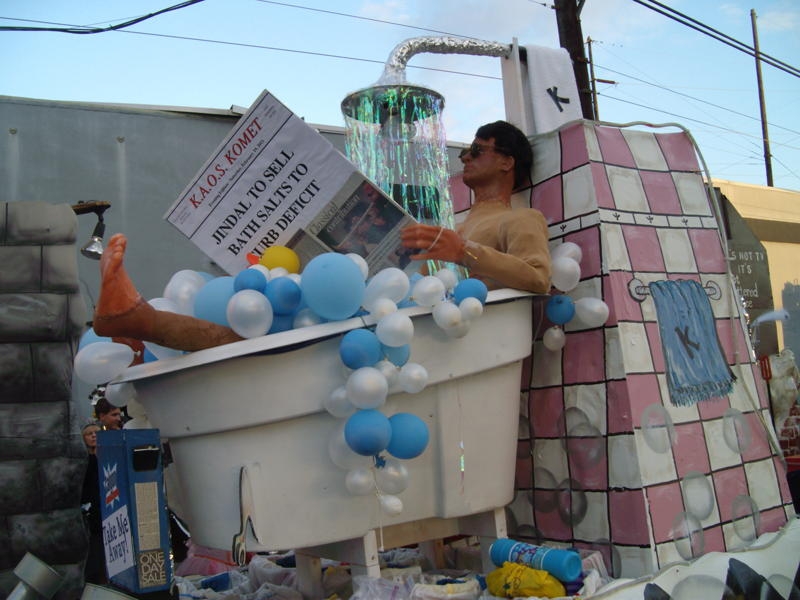 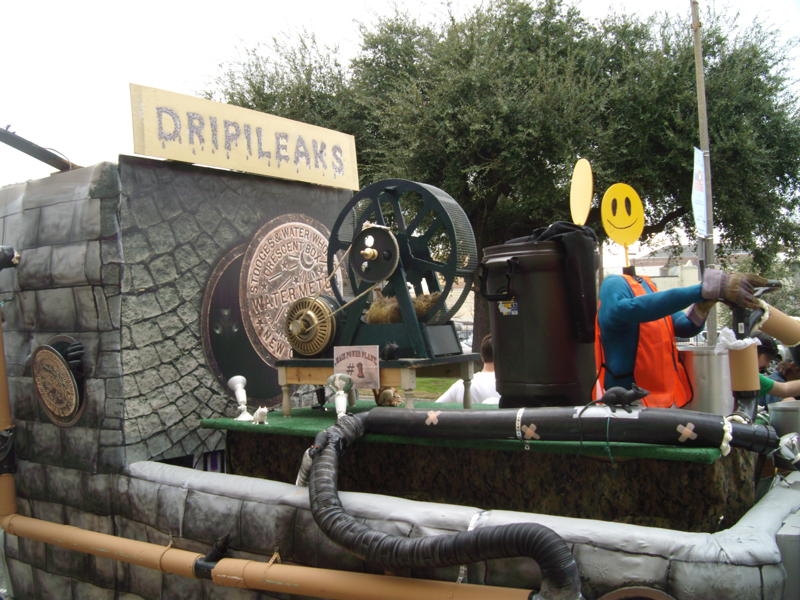 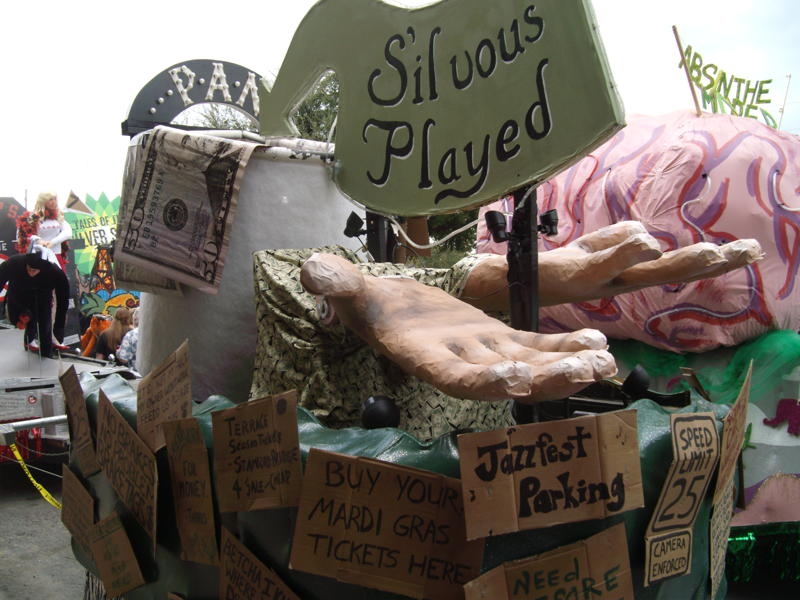 This entry was posted by NewOrleansMusicMan on February 21, 2011 at 7:43 pm, and is filed under Carnival, Carnival New Orleans, Mardi Gras parade, New Orleans Carnival. Follow any responses to this post through RSS 2.0. You can leave a response or trackback from your own site.