By Judy Walker, The Times-Picayune

Mardi Gras king cakes are big business. Read about all the varieties in this article originally published by The Times-Picayune on Thursday, January 24, 2008.

It is the earliest Mardi Gras since 1983, and the earliest it will be again until the second half of the century. But ready or not, this year’s Carnival is packed full of sweet new things to eat, strong beer and silly new twists on the usual digestible traditions.

The iconic king cake always is subject to experimentation, but this year’s variation takes the, uh, cake: an amazing crab- and crawfish-shaped king cake at Hi-Do Bakery in Gretna. “Originally, we were making the regular style,” said Kim Do, daughter of owners Ha and Huyen Do. “My dad said everyone here loves the seafood. We ourselves eat that all the time. He said, ‘I bet everyone here would love to have the shape.'”

See the raisin eyes on this 22-inch crawfish cake?

Ha’s shaped cakes are big, about 22 inches long for the crawfish, priced at $21.99 plain and $25.99 filled. Usually, the bakery can fill orders within a few hours, Kim Do said. Norma’s Sweets Bakery, a four-year-old Hispanic bakery in Kenner, is now baking king cakes with guava, guava and cream cheese or pineapple filling. “Spanish people eat a lot of pineapple and guava,” said owner Norma Castillo, who is originally from Honduras. “And Caribbean people like the guava.”

Steve Himelfarb has an unusual new filling at New Orleans Cake Cafe & Bakery on Chartres Street. Long known as “The Cake Man” for the cakes he delivered, including a king cake stuffed with raspberry filling, Himelfarb wanted something different for the new bakery.

This not-too-sweet cake is stuffed with goat cheese and green apples.

“It worked immediately,” Himelfarb said. “My thought was maybe we’ll sell a couple and it’ll be fun. People are calling us now and asking for it. It’s been by far our best-selling king cake, even this early on.”

The not-too-sweet cake coils upon itself and is decorated with Jackson Pollock-like stripes of purple-green-and-gold glaze. It’s $25 and is designed to feed 15, “except that people are taking much bigger slices,” Himelfarb said.

This is the first year for king cakes at Sucre, too, the Magazine Street dessert boutique. Co-owner and pastry chef Tariq Hanna said, “Since I’m ‘not from here’ I had to do some research.”

The resulting “king of cakes” look like 8-inch ($12) and 10-inch ($16) doughnuts covered in a purple-green-and-gold iridescent luster, and Hanna warns that there is a “baby on board.” He also says the cake should be heated before serving

Gerard Marchal at Croissant d’Or Patisserie on Ursulines Avenue is one of the French bakers who makes the alternative king cake, the traditional French puff pastry with frangipani inside. This year, for Mardi Gras, he is adding something different to the menu.

“I’m making some beignets just for Mardi Gras because they are traditional in France, filled with Bavarian cream,” Marchal said. “I was in France some months ago, and a friend said he used to do that, and I said, ‘Ooop! Let me do that, too!’ ”

Bavarian cream is new on the north shore, too. For the first time at Marguerite’s Cakes in Slidell, king cakes are filled with it, giving the cake the taste of a cream doughnut.

And at Angelo’s Bakery on West Metairie, an old favorite is newly drizzled atop the praline- and strawberry-filled king cakes.

“Everybody around here eats the king cake. Praline is always a favorite, and everybody likes chocolate, so we just combined it,” owner Lisa Seaward said. “It’s going over pretty well.”

Another chocolate-topped king cake, the Zulu king cake with a coconut filling and coconut topping on the chocolate, seems to be in shorter supply this season (although a bakery in Beaumont, Texas, is selling them on the Internet). But the four locations of Coffee & (in Kenner, Gretna, Harvey and Marrero) will make them if you order 24 hours ahead.

Like the Zulu king cake, the concept of ice cream king cakes has spread around. Creole Creamery on Prytania Street has made them the past few Carnivals, and Baskin-Robbins stores in the New Orleans area sell them, too.

David Bergeron of Creole Creamery makes his with seven scoops of cinnamon-and-cream cheese flavored ice cream as the circular base. Then he dyes regular vanilla ice cream in Carnival colors, melts it and pours it on top, and decorates it with sprinkles and cherries. It costs $20 and contains about 10 scoops of ice cream.

“And of course there’s a baby in it,” Bergeron said.

The Baskin-Robbins versions have ovals of vanilla or chocolate cake as the base, with ice cream frozen on top of that. Those who order ahead can specify any flavor ice cream, but the ones in the freezer cases are usually the most popular flavors (vanilla, pralines and cream, or Creole cream cheese), said Carrollton Avenue franchisee Kim Guardiola.

“We’ve been doing the king cakes for about 20 years,” Guardiola said. “There’s no local advertising. It’s new to a lot of people; they still don’t know we do them.”

One under-reported Carnival treat is the truffle or other sweet goodie in a pretty little box, given to guests as ball favors and party favors at private events.

Hundreds of favors are sold every year at Blue Frog Chocolates on Magazine Street. New this year in favor boxes are almonds covered in semisweet chocolate in jeweled metallic colors, $14 a pound. And kids can lick Blue Frog’s new purple-green-and-gold whirlie and swirlie lollipops while waiting for parades

Whirlie and swirlie lollies in purple, green and gold, from Blue Frog Chocolate

Of course, beer is more common on parade routes than lollipops. The newest Abita brews, Mardi Gras Bock and Jockamo IPA, are 6.5 percent alcohol, compared to about 4.5 percent for their amber beer.

Abita has made a winter bock beer for a while, but a couple of years ago everybody on the street was calling it Mardi Gras Bock, so they started putting that on the label, Abita Beer president David Blossman said.

“A long time ago we made a Jockamo stout that was a specialty beer,” Blossman said. “We love the Mardi Gras Indian culture, and we’re trying to do our part to raise awareness for it.”

Support of a different type is being provided to some of the patrons of the Ritz-Carlton New Orleans, which has had, in the recent past, an oyster butler, a crawfish concierge and a snowball sommelier.

This Lundi Gras and Mardi Gras, patrons staying on the club level can use the services of a “Recovery Concierge,” also known as a hangover helper.

At the recovery station, Russell Sutherland will offer “Cure royale” (instead of Kir royale), mimosas and Bite the Hair of the Dog Bloody Marys, as well as sparkling waters, Alka Seltzer and other pain relievers.

It’s February and a little chilly — not too chilly for an Abita seasonal Mardi Gras Bock beer — and the streets have been closed to traffic. Locals are emerging from their homes, usually in the day’s signature pink, to wander, drink, smile, laugh and travel between early-morning parties. The visitors will be here soon. Many are already tailgating in nearby parking lots.

Gumbo and jambalaya won’t be ready for hours. Right now, it’s bloody marys, Cajun-spiced eggs and king cake, that deliciously gooey circular pastry in which a small baby figurine has been baked. Beads have yet to fly, but they will. It is the Saturday before Fat Tuesday, and 80 miles north of New Orleans, the best parade in the state is about to happen.

The Spanish Town Mardi Gras Parade is named for the neighborhood where it starts: Spanish Town, a patch of narrow tree-shaded streets and the traditional home of artists, boozers, cross-dressers and any free spirit in this conservative town. It is the city’s oldest and most eclectic neighborhood, appropriately listed on the National Register of Historic Places. The parade begins on its main artery, Spanish Town Road, before heading into Baton Rouge’s downtown of midrise office buildings.

I’ve seen New Orleans parades, small-town parades and rural horseback parades, and Spanish Town’s is the perfect amalgamation: rocking like New Orleans, intimate like a small town, with a dash of the country’s carefree calamity. Remember your birthday as a kid? The glory? The excitement? The knowledge that for one itty-bitty day, no one was more special than you? That’s what the Spanish Town parade feels like. Except that on Saturday, it’s everyone’s birthday. No, it’s not New Orleans, but that’s part of the raunchy, beer-soaked fun. Spanish Town Mardi Gras is tightly packed and joyfully unhinged without the expectation of being New Orleans.

By 10:30 a.m. breakfast is finished and houses start opening their doors, releasing the smell of gumbo. More R-rated costumes arrive, more beers are opened, and a 300-pound man dressed as the Octomom exchanges warm greetings with a uniformed cop. Turns out that 300-pound man was once a higher up in the governor’s office. In the costumes, the floats, even the theme of the parade, you learn that nothing is sacred, particularly power and politics. Months after Hurricane Katrina devastated Louisiana, the 2006 theme was “FEMAture Evacuation.”

The Spanish Town parade starts rolling at noon sharp, led by the grand marshal and, in recent years, the motorcycle-riding Baton Rouge police chief, who gladly poses for photos with drunken revelers.

The floats start inching by, and hands fly into the air. In pursuit of beads, women shake what God gave them. So do men. The roar is steady, cacophonous and endless. People load themselves with beads, load their neighbors, load their friends. Despite beer and homemade drinks aplenty, things don’t get out of hand. Everyone is a friend here.

Time stands so still that it’s hard to say how long the parade lasts. Maybe 90 minutes. Like most, it ends with an inglorious thud, street sweepers trailing the last float but doing little good against the quilt of beads. Beads are everywhere. In bushes, in trees, on power lines, and kids invariably try to shake them loose while adults wobble around them.

Then the house parties start again. Bands play in front yards and backyards. Gumbo and jambalaya steam in cast iron pots, and beer is everywhere. The partying goes on like this until about 5 p.m., when everyone starts hitting the wall. At 6 p.m. you’re done. The wobbliest are still trying to find which house they left their coat under, and everyone else goes home. 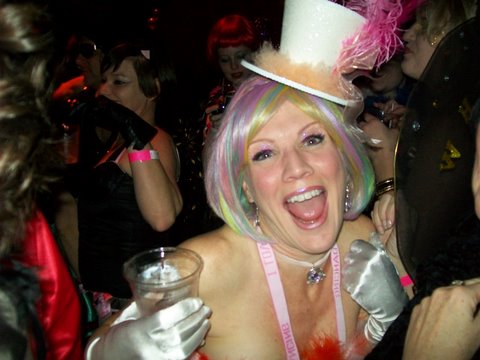 Pussyfooter having fun at her ball 2010 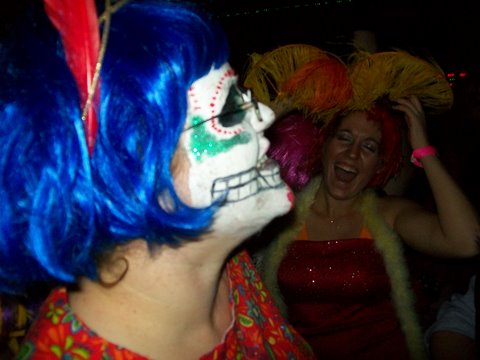 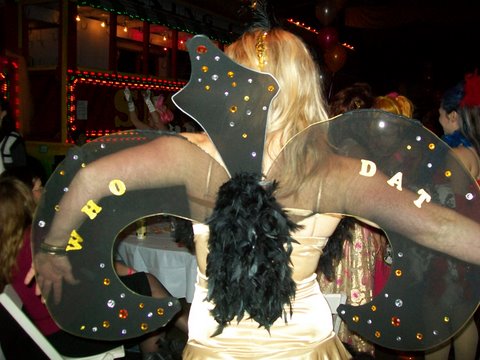 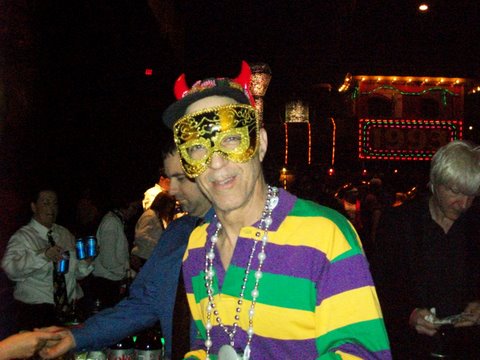 State police will be in New Orleans for Mardi Gras

BATON ROUGE, La. (AP) — Budget cuts will not keep the Louisiana State Police from beefing up protection in New Orleans during Mardi Grass.

State Police Superintendent Col. Michael Edmonson said on Thursday that he is taking steps to hold down overtime so that 118 troopers can be freed up to spend Carnival in New Orleans.

Edmonson says the plan he and New Orleans Police Chief Warren Riley have worked out will have uniformed officers mostly in the French Quarter and Central Business District. He says that will provide a solid presence in that area.

Edmonson says it also frees up NOPD officers for other areas.

The Second Annual Blush Ball, Mardi Gras kickoff celebration with the Pussyfooters Marching club and service organization was an event not to be missed!  Blaine Kern’s Mardi Gras World (Westbank) was the perfect location for a Mardi Gras Party. The featured artists were Big Sam’s Funky Nation, DJ Soul Sister, the Mardi Gras Indians, the 610 Stompers, and the Pussyfooters.

This was a party with a purpose-  a portion of proceeds went to support the Metropolitan Center for Women and Children. Visit metrobatteredwomen.com for more info. Metro provides victims of abuse with a crisis line, counseling and legal advocacy, and shelter services throughout the Greater New Orleans area. 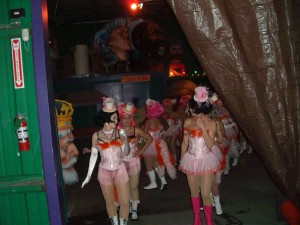 Pussyfooters line up before stage routine

Here’s a photo of my friend Jack underneath the Bacchusaurus 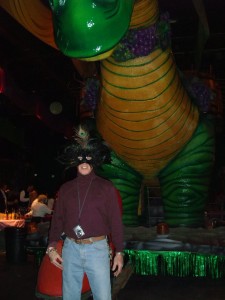