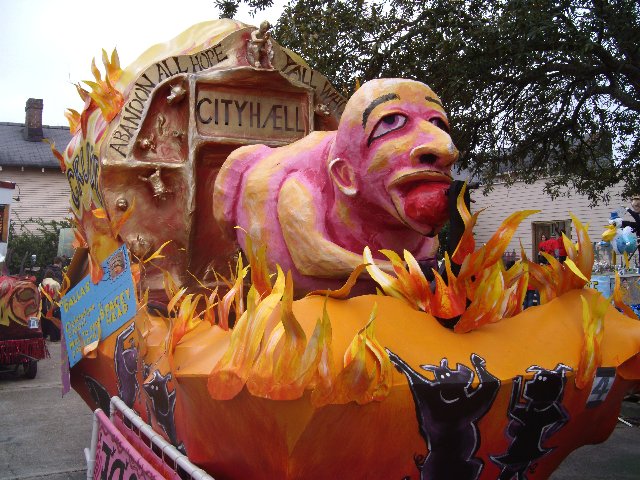 Medium Rare? Medium? How do you want your Ray Nagin burger?

68 degrees and sunny is the forecast for my parade, the ultra cool, edgy, historical KdV. My costume is taking shape very nicely, my throws are novel for me, and I’ve reviewed all rules and regulations I’m supposed to know as a Krewe of Underwear Escort. The parade rolls through the French Quarter and Marigny at 6 pm. KdV’s theme this year is Where the Vile Things Are. Our king is wetlands restoration advocate and historian John Barry.

Check out my story on Ray Nagin’s federal corruption trial, now with the jury, here.

A bit more about my main costume. I have a furry purple and green animal jumpsuit/costume. Over that I have neon green pimp’s jacket. I have a long purple, green and gold silk scarf with a pansy design, plus a purple sheer scarf with shiny gold mini dots throughout. I’m going to cross the scarfs around my neck and down my back in a cape-like way, and secure the crossing with a Carnival colored crown pin. I have some old KdV and MOMs Ball buttons to wear on my jacket. I still need a hat and mask, but I’m going to the Costume Bazaar on Feb. 16 at the Healing Center, 2572 St. Claude Avenue.

Krewedelusion follows KdV.  They have a New Orleans celebrity for their 2014 Ruler, DJ Soul Sister, aka Melissa Weber! This is a good way for a krewe to garner some free media. The Nola Defender broke the story.  Queen Melissa “DJ Soul Sister” Weber is inheriting the throne from Cheeky Black, last year’s Queen. The Soul Sister is the R&B bomb! Her DJ sets are considerably hotter than many live music sets that occur before and after her set. 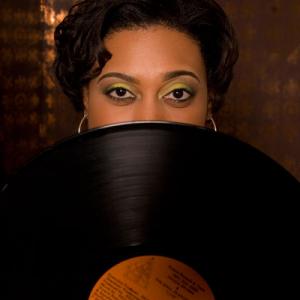 We are honored, announced Captain Oscar Diggs in a release, that New Orleans native and internationally renowned superstar disc jockey Melissa Weber shall be our next Ruler and shall be crowned Soul Sister #1 and Captain of New Orleans. 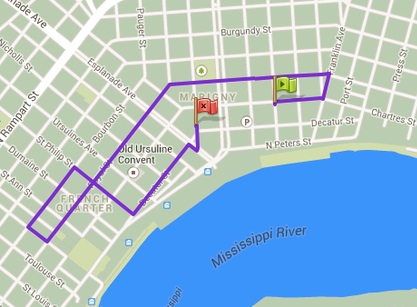 I’m such a huge Mardi Gras fan, I love those purple, green and gold Carnival colors. Except for a couple of exceptions, I always costume in those colors. I cannot help it- they are the only ones that will make me happy when I costume, I admit. I’ve got a super, special, all new for me costume for KdV and Fat Tuesday.

Last year, Carnival wasn’t the same to me, the first since my wife passed. This year, I feel my old Carnival mania and deep seated love returning. It feels great. I live a scant 2 blocks from St. Charles, and 1 block from Napoleon. That’s parade central! I think I’ll have a crock pot of gumbo ready all parade season. Maybe set the record for gumbo serving over 10 days. 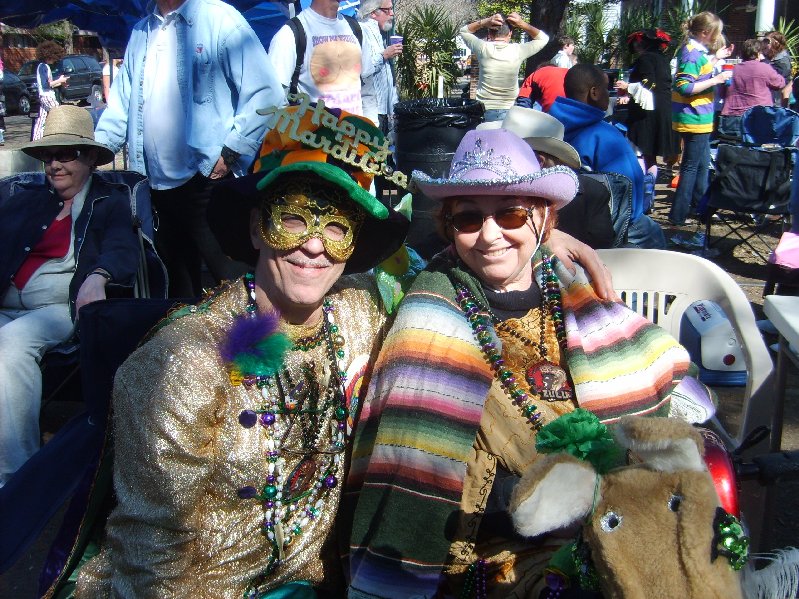 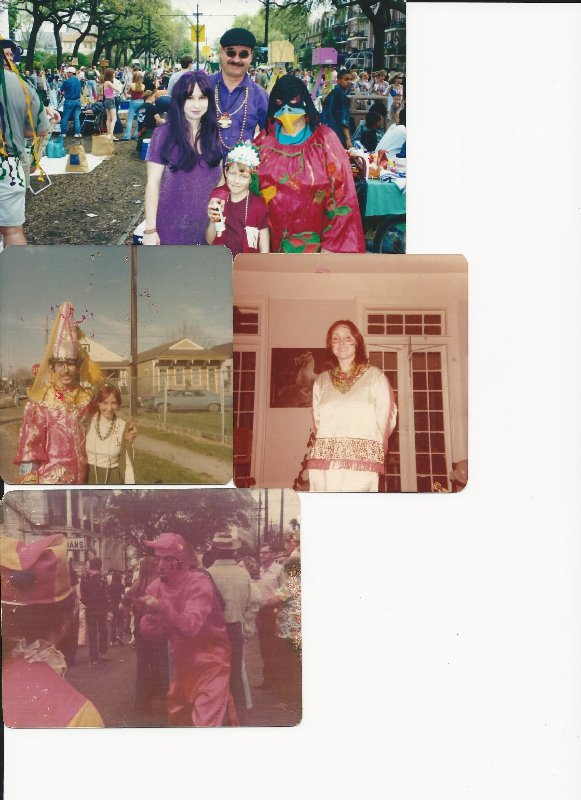 Mardi Gras the last two years has sucked for me. A major personal tragedy occurred in my life and it took a couple of years to come back. This year I’m living very very close to the main parade route. That should make for one big Carnival party at my place. I expect the 2014 Carnival season to be a fabulous one.

Mardi Gras is March 4th this year, and since Twelfth Night is a fixed date, January 6, the Carnival season is long. The season can be long or short or somewhere in between. The first parade in Orleans Parish annually is KdV (February 15), and I roll with them. Hurray!! Yeah!! Fun time!!

We roll in the French Quarter and Marigny, and our floats are pulled by mules, as they were a hundred years ago. We’re the only major Orleans Parish parade in those historic neighborhoods. Our floats are handmade by each sub krewe and far smaller than regular floats. The main krewe and the sub krewes make and throw their own buttons, with the central parade theme and the sub krewe’s theme on them. 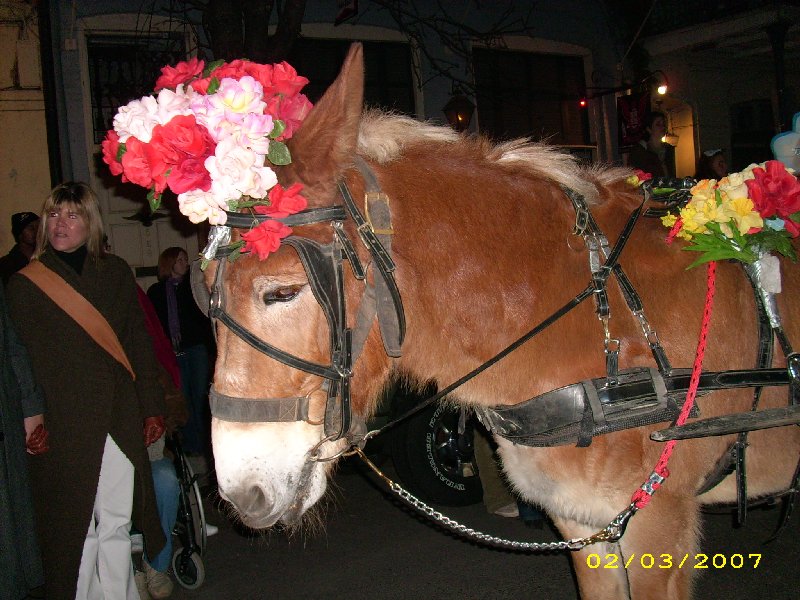 The true strength and power of KdV can be plainly seen in our unbelievable list of brass bands. I’m in the music business and I cannot fathom this amount of brass muscle! 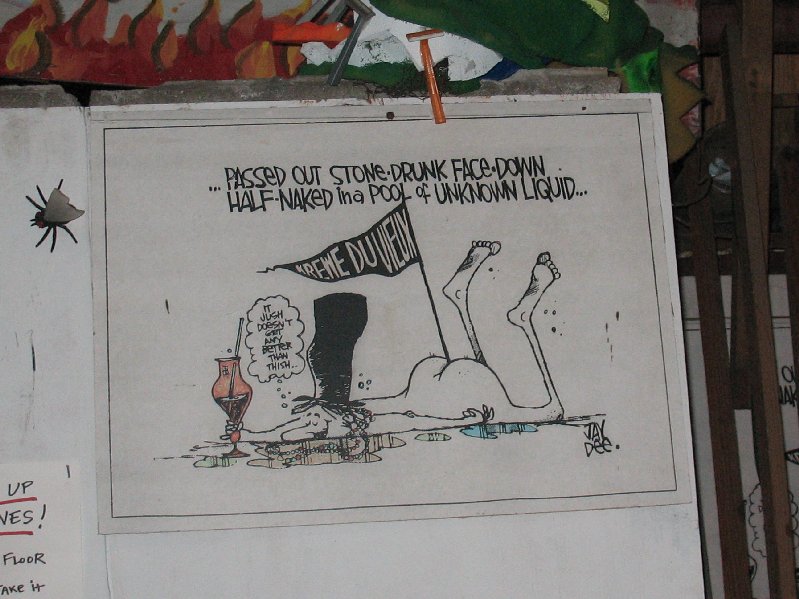 Gretna and the North Shore continue to struggle with krewe membership problems. The leading factor is financial difficulties. For 2014, the North Shore will have only a single parade, the krewe of Eve. Eve’s membership is down from 570 to 300. That’s a drop of almost 50%, but the krewe is still large enough to support the parade. Mandeville’s Krewe of Orpheus didn’t parade last year and didn’t file to parade in 2014. The Captain said the membership had declined. This hardly constitutes a parade season on the North Shore.

On the bright side, Slidell’s Krewe of Claude failed to parade in 2013 but will be rolling for 2014. In fact, Slidell lost no parades from last year even though several krewes reported financial and membership difficulties, an excellent record considering what occurring in Jefferson and the North Shore. Last fall, the Slidell City Council passed new Mardi Gras regulations that raised fees for parades, instituted a minimum number of floats and riders per float for a parade.

The New Orleans City Council made sure they would originate many of the Orleans Parish Mardi Gras changes this year with a new group of rules and regulations concerning Carnival. You can read about the bill here.

The first parades down St. Charles in 2014 roll on Friday, February 21. Orleans Parish gets two days off this year, February 25 and 26 (Monday/Tuesday). I’m looking for a warm Mardi Gras, almost all Fat Tuesdays that fall in March are warm. It’s been a very cold winter so far in New Orleans, so we’ll have to see.

I love all Mardi Gras parades, and always have. Any krewe that can jump through all the hoops necessary to put on a real parade has my undying respect. It never was easy and now it’s very daunting. Parades and insurance costs go up and up. Krewes must have a minimum number of floats and bands now.

Nevertheless, I have my favorites and this forecast will highlight those. I look forward to my own parade, Krewe du Vieux, of course. It’s a lot of fun. The first weekend of parades, I prefer Sparta, Chewbaccus and Alla. Then Babylon, Muses, d’Etat, Tucks, Endymion, Mid City, Thoth, Bacchus, Proteus, Orpheus, Zulu and Rex. I love the truck parades down St. Charles.

The Krewe of Freret is back for 2014 after being gone for 2 decades! I’ve watched Freret when it rolled down Freret St.  When I lived on Robert Street for a decade the Freret procession was my neighborhood parade. 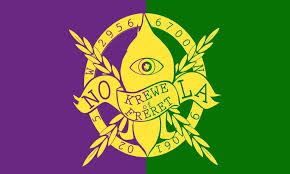 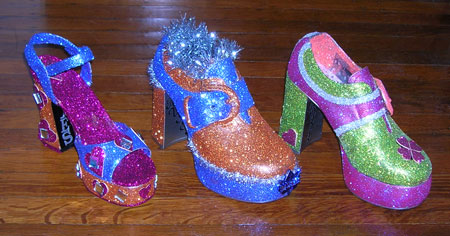 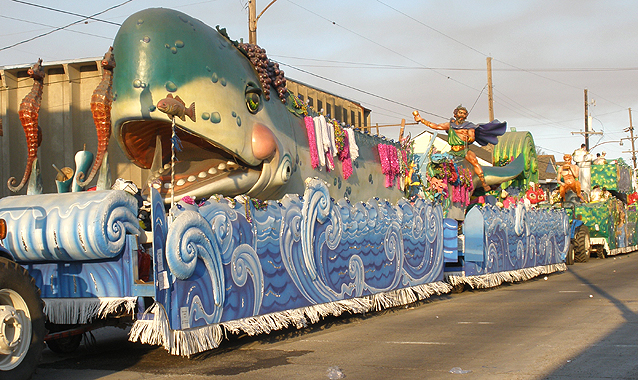 The green movement has met Mardi Gras, and it’s resonating with the holiday. Most people realize that beads come from oil and from China and are one big waste of resources. They don’t compost very well either. Many organizations like ARC recycle beads and groups like verdigras.com strive to recycle, reduce and reuse.

Bring your Mardi Gras Beads to one of these following Arc locations:

Forward leaning krewes like Krewe du Vieux and Chewbaccus make many of their throws by hand and use recycled materials in their throws. 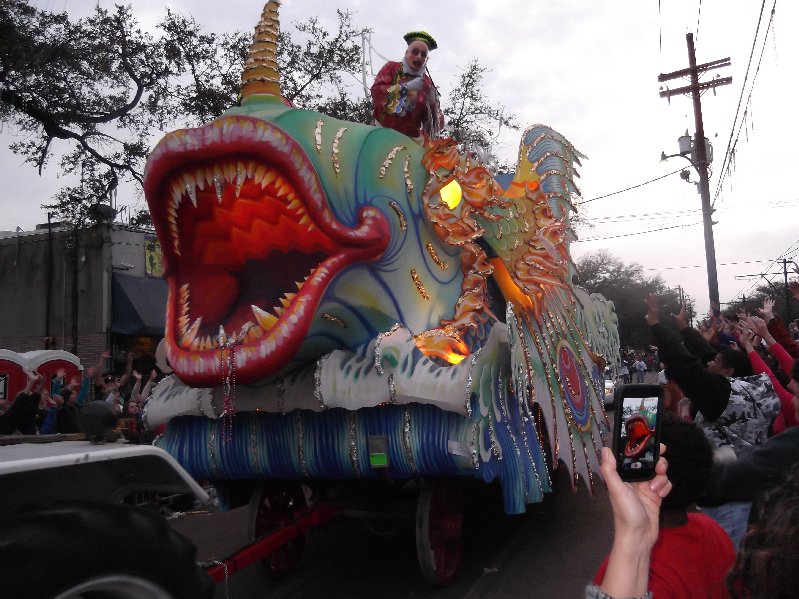 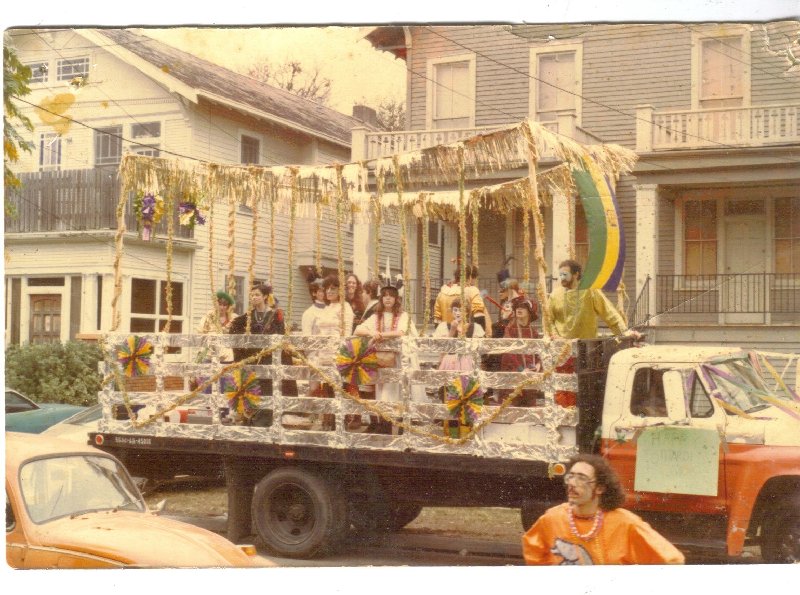 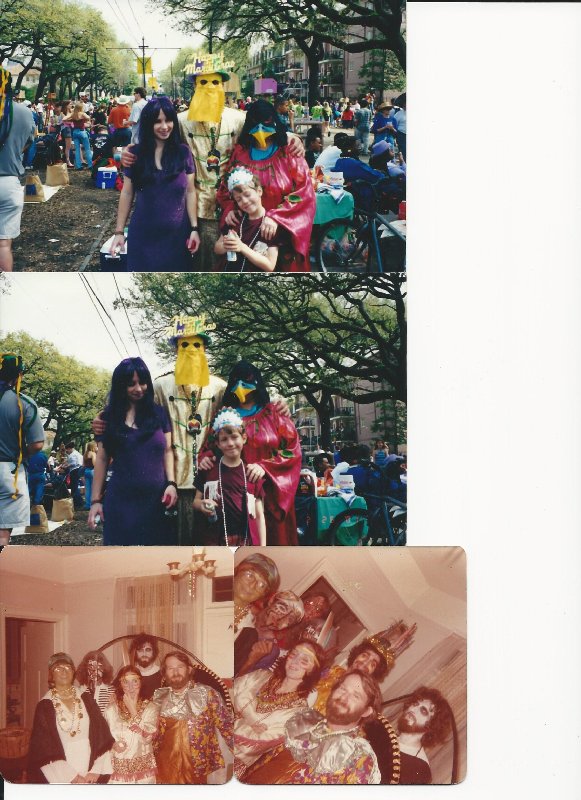 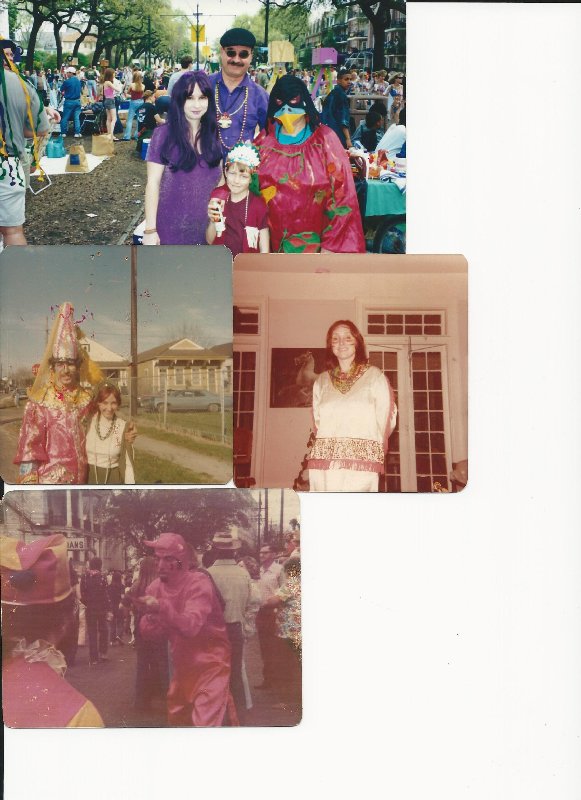 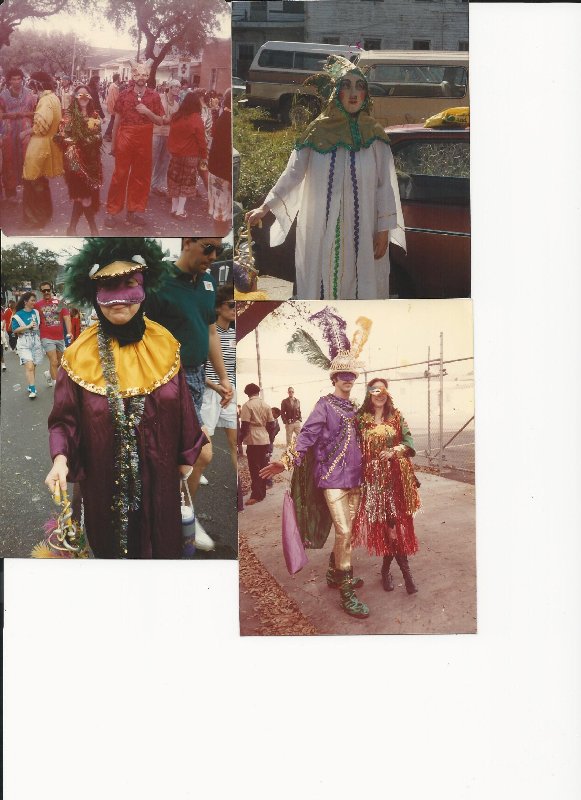 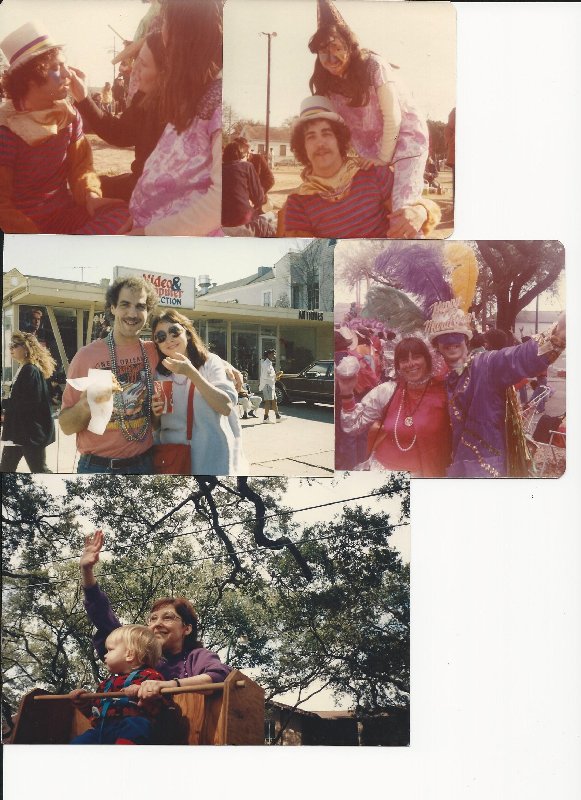 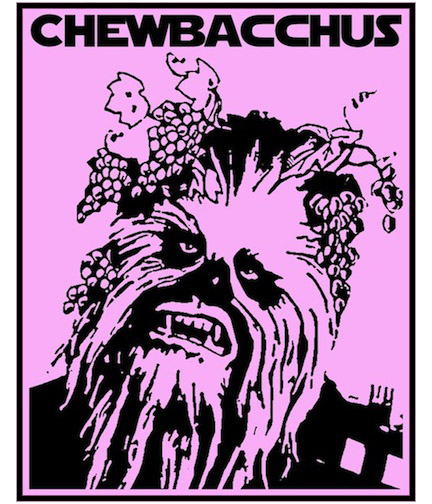 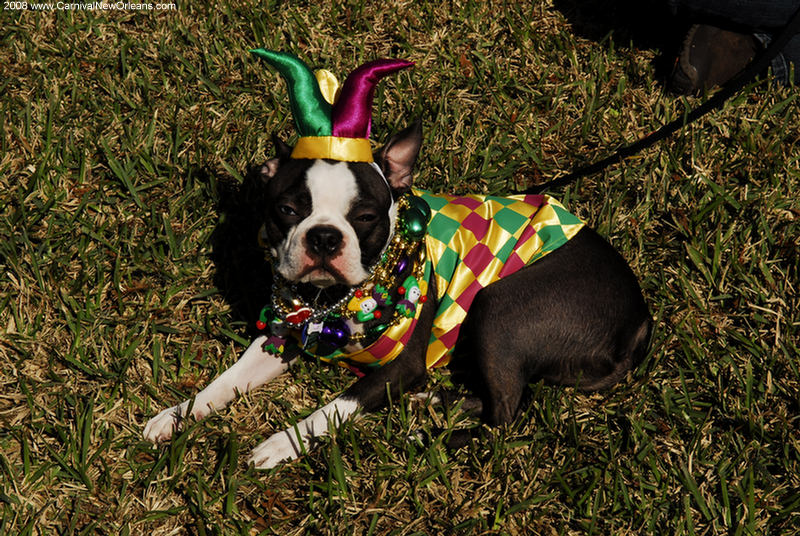 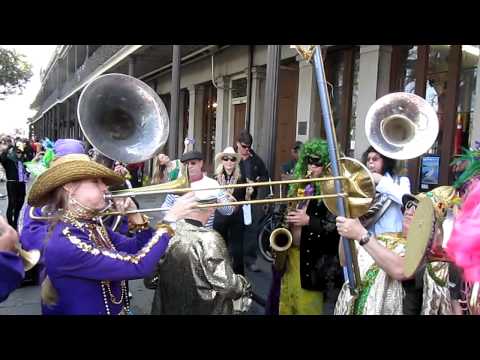 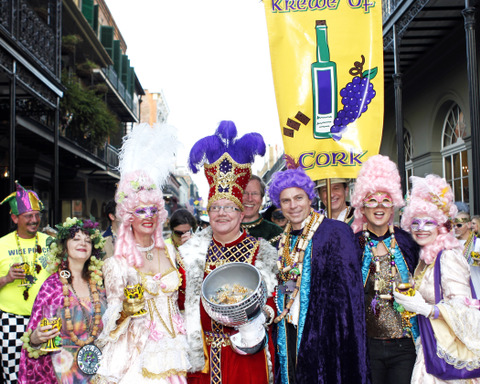