2015 was my best Mardi Gras in five years. I saw more parades and had more fun. That’s due to better parade company. I’m a parade freak, and if I go to parades with like minded freaks, I’m apt to enjoy myself lots more. 3 years ago I was forced to change my long term parade freak partner and it took me a couple of years to get it right again.

Wednesday, February 12 when Druids and Nyx rolled, I paraded with a special friend of the opposite sex who I hadn’t paraded with before but she told me she was a parade freak. That turned out to be true and a surreal, delightful Mardi Gras parade night was had by both of us. 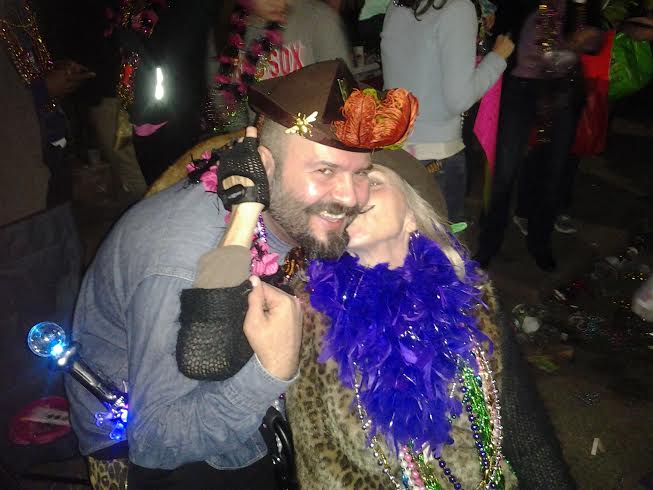 Claudia G at NYX Parade with friend from Brazil!

At Zulu I caught 4 coconuts and at REX, which had a different medallion for each float, I caught over half. I do fairly well at the parades although I’m rarely the target demographic because I costume a bit for all parades and I’m active on the parade route, that is I scream Happy Mardi Gras, Throw Me Something, and other similar exhortations. I had a ball at the parades on Fat Tuesday 2015. It was quite cold all day and windy, but the rain held off completely. I biked to Zulu and then biked to REX.

My food situation was well in hand on Lundi Gras, but by Fat Tuesday, all my plans of a delicious spread had fallen apart. I had made a big pot of my special red beans in the crock pot, and bought a high grade of cold cuts, some mini pistolettes, good cheese and tomatoes to make some sandwiches to eat on the go. On my bike I couldn’t carry the container of beans, and I couldn’t find my cold cuts. So off I went on Mardi Gras Day on my bike with a package of Rouse’s cheese straws, some Pepperidge Farm Nantucket cookies, and two small packs of Cheetos. All day I snacked on the cheese straws, which were to die for- deep cheese flavor with just the right amount of heat and spice, plus some vodka and OJ and Pabst Blue Ribbon.

One of the most heartening trends this year was the preponderance of young parade goers who costumed in some respect for all the parades, not just Fat Tuesday. I took the St. Charles streetcar a lot in 2015 for Carnival and every time I got on there were lots and lots of young folks wearing a head piece, mask or other costume part. I realize part of my attraction to Mardi Gras is the make believe and fantasy aspects of the celebration, so I really found all this new costuming very attractive. You can dress up and become anyone or anything your mind and imagination can envision and create. The possibilities are endless.

More and more high flying adult dance troupes have joined in the parading fun. The Sirens, Muff-A-Lottas, 610 Stompers, Disco Amigos, Pussyfooters, Dames de Perlage, Try Athletes, Bearded Oyster Dance Troupe, Rolling Elvi, Organ Grinders, Roux La La, Amelia Earhawts, Kolossos, and the Star Wars themed 501st Legion were just some of the fab groups entertaining the crowd. I have a friend who texted me after a fun night of parading together that she found a Roux La La couzy in her bra when undressing that night. She said it was the perfect testament to a great evening. O.K., maybe she’s more than a friend. 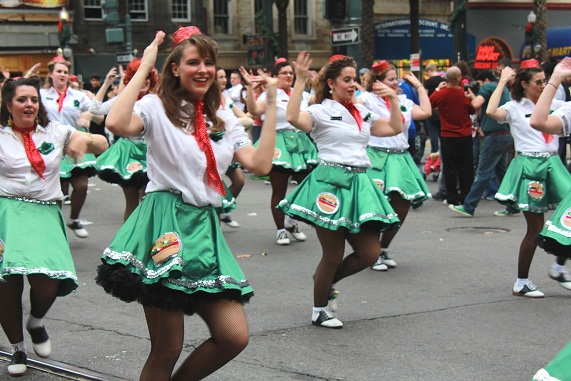 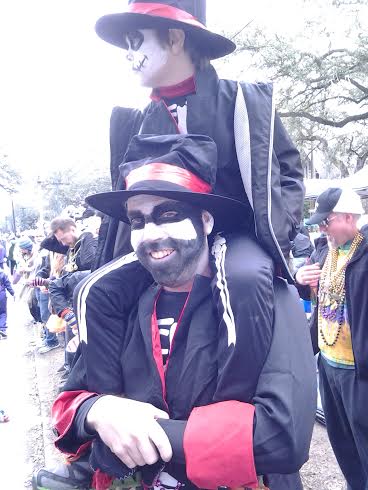 Lighted beads were ubiquitous for the night parades. Proteus lit up the necklace part, not the medallion like everyone else. There were light up pitch forks, blades, styrofoam tubes, and just about anything else a light could be attached to.

Muses is well known throughout the Mardi Gras universe for their shoe throws. I received my most unusual Muses throw right from a float rider. It was a pack of rice beads with the plastic connectors, but it has a small metal Muses M attached  with the ubiquitous bead/medallion metal connector. What kind of statement was Muses making with these retro beads? 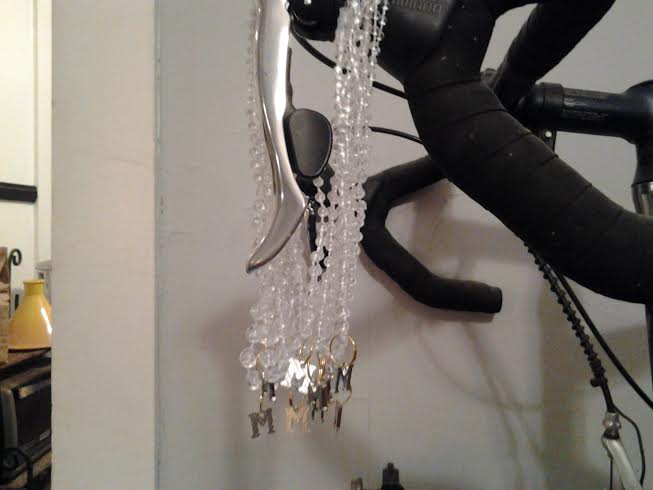 Nyx has really come into their own. There were decorated purses coming off the floats in large numbers and many dancing troupes.

360 lenticular cups were thrown by D’Etat, Orpheus, Babylon and Iris. A lenticular lens is an array of magnifying lenses, designed so that when viewed from slightly different angles, different images are magnified. 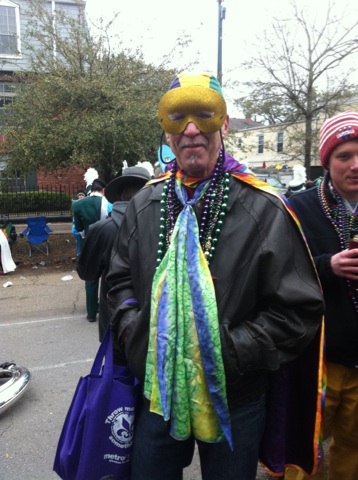 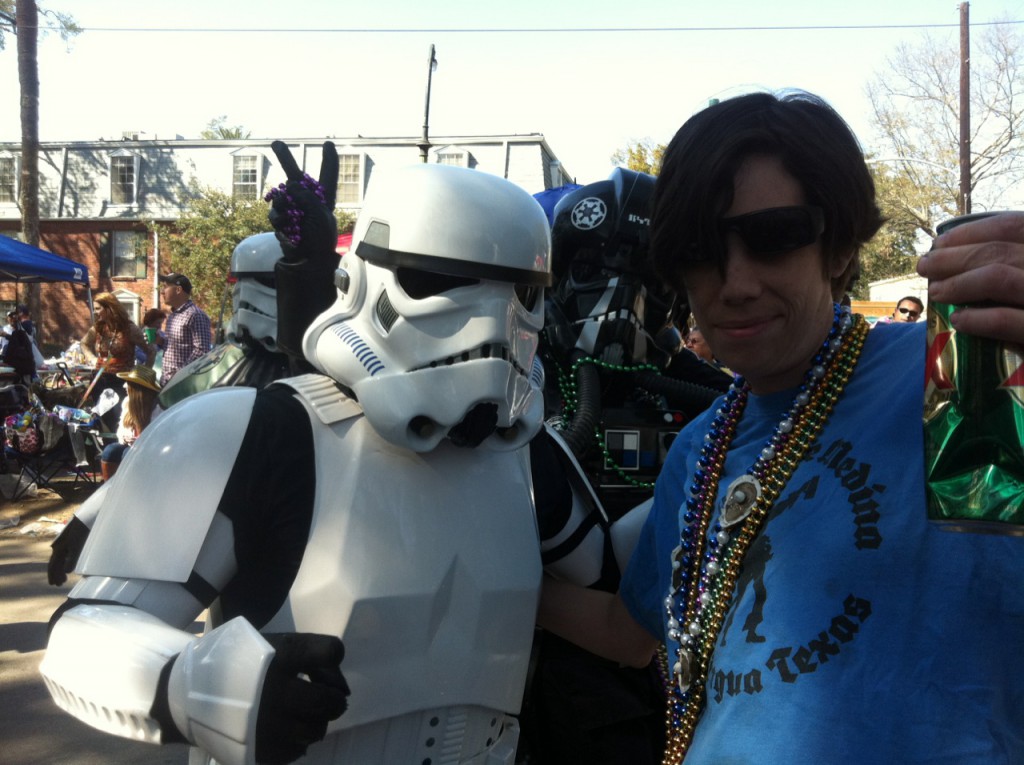 Billy B with Storm Trooper

I attended a number of gatherings along parade routes off of St. Charles and Frenchmen Street. I had a lot of fun and laughs at each and every party. Walking back and forth between the house and the parade is the height parade enjoyment. Some soirees are invitation only, which a security guard checking online invites, but for many others, just showing up is enough to gain entrance. Often the food, booze and crowd is a step above the average New Orleans party- and New Orleans is well known for throwing world class parties.

Proteus in the Daytime!

Hell freezes over! Pigs fly! Since the start of time, or whenever Proteus began parading, whichever came first, Proteus parades at night. Flambeaux carriers only light parades after the sun goes down. Wrong! The start time for Proteus and Orpheus were moved up 75 minutes due to inclement weather considerations, so they rolled in plain, old daylight.

This entry was posted by NewOrleansMusicMan on February 19, 2015 at 4:33 pm, and is filed under Carnival New Orleans, Krewe of Muses, Mardi Gras, St Charles Avenue. Follow any responses to this post through RSS 2.0. You can leave a response or trackback from your own site.