History repeats itself every Mardi Gras. Thousands of tourists and locals  will wake up at the crack of dawn and head out to the neutral grounds and sidewalks  around Jackson and St. Charles Avenues with hopes of snagging a Zulu coconut. Then, they’ll wait. And wait. And wait.

They’ll wonder if they read the parade schedule wrong, walk into the middle of the street to see if anything is coming, and then it will hit them like a double-decker float: Zulu always runs late (exception: 2010)

But this year, smart phone owners will be able to sleep in. Even though they could be miles away from the parade, thanks to a new app with a built-in parade tracker, they’ll be in the know.

The parade tracker relies on devices placed on the head and tail floats of select parades, said Rob Hudak, the interactive creative director at Zehnder Communication Inc., the New Orleans company that created the app in partnership with television station WWL.

The free app, called Experience Mardi Gras, is in its early stages but still will allow parade-goers and those hoping to avoid parade traffic to track up to one parade every day starting with Muses on March 3 and ending with Zulu on Fat Tuesday. The app also features a post-parade events section and live streaming video of select parades.

That means only the last half the parade season is covered by this app, which isn’t very good. 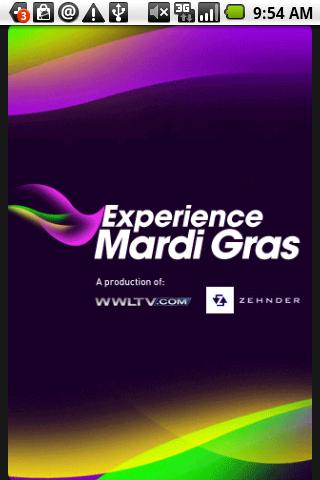 “This is version 1.0, and we hope it grows into a more robust app experience,” Hudak said. “We’re talking about adding social and augmented reality components. Something almost like an extension of the Mardi Gras experience.”

There are a handful of apps connected with Carnival, but Zehnder and WWL’s app actually provides real-time tracking of Carnival parades, without relying on user-generated reports.

WDSU-TV has a parade tracker program that originate from a person riding in a car at the front of most parades. The human reports are converted to text messages which are sent to participating phones.  This program is free. Arthur Hardy’s Mardi Gras Guide has a program that basically is his magazine on your smart phone. He charges 4.99, same as his magazine, I think.  There are a number of free phone Mardi Gras theme wallpapers available.

Production of the app began in December and comes on the heels of a successful Voodoo Experience music festival app that the agency launched in October. Augmented reality was heavily utilized in that app.

With the Voodoo Experience app, concert-goers could point their smart phone cameras at a band and the app would tell them who was currently on stage. It would also give them information about the band and who was playing next.

Hudak envisions using the same concept for the Experience Mardi Gras app by 2012.

“An idea we’re throwing around is doing virtual throws, so that when you point your phone at a float, it’ll have a button that you can press to get a throw, which could be a coupon to a sponsor,” he said.

Sponsors currently include Zatarain’s and Tabasco, but Hudak expects to add restaurants and bars on the parade route in future versions of the app.

I attempted to find this program with my HTC Hero smart phone, and my market search engine (google!) couldn’t find any Experience Mardi Gras app. When I used my phone bar code scanner program to scan the QR code provided, my phone recognized the code but was unable to find the web site. Then I went to the web site the article linked to, and clicked the download link. The site indicated the download had started, but I never received the app.

I’m not sure releasing the app in time for Carnival 2011 with this many bugs was a wise move. Time will tell.

From the Appbrain.com web site-

Experience Mardi Gras is an app like no other. You can follow your favorite Mardi Gras parades as they’re happening! Find out schedules, routes, events, and more with this one-of-a-kind interactive, mobile application.

It’s the only app to offer the PARADE TRACKER feature, so you can follow the parade as it makes its way to your exact location. While the app follows the biggest krewes as they make their way down New Orleans’ historic streets, you’ll be the first to know when the parade is over so you can beat the crowd to the next event – no more guessing about when it’s going to end or if the parade has broken down.

This app uses Google Maps to give you the most accurate parade routes, helps you navigate the city and lets you know exactly when and where to be for the best parades.

And while you’re waiting on each parade to reach your location, the app features authentic and entertaining videos of this year’s Mardi Gras as well as years past. Learn some fun facts about storied carnival traditions from the unique personalities that make this New Orleans’ favorite season while receiving up-to-date information on route changes, dates, and times for Mardi Gras 2011!

After the parades, use the EVENTS page to plan your evening out. Find out where all the action in the city is happening and where your favorite band is playing.

Download the best guide to everything you need to make the most of your Mardi Gras Experience in a single spot!

– Google Map of all parade routes

– Up to the minute listings of events, music, and happenings around town

Latest version: 1.05 (for all Android versions)

This entry was posted by NewOrleansMusicMan on February 14, 2011 at 7:04 pm, and is filed under Carnival, Carnival New Orleans, French Quarter, Mardi Gras, Mardi Gras Parade, New Orleans Carnival. Follow any responses to this post through RSS 2.0. You can leave a response or trackback from your own site.